People who are talking about us after Bett 2017 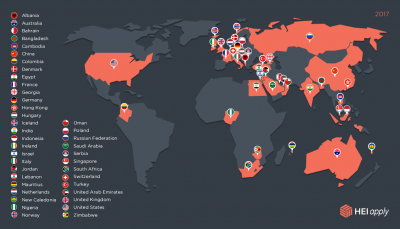 We’ve had a brilliant start to 2017 empowering institutions worldwide to enable the ultimate applicant journey by introducing HEIapply, connecting online via Social media and offline via Bett.

Over the years, we’ve transformed the applications processes in Further Education (at Ravensbourne, London), and reached for Higher Education with International Admissions at (Aston University, UK). Not stopping there, we have simplified very complex admission processes for Shell’s International School in Oman: PDO.

January ’17 began with the MiSK Foundation (Saudi Arabia) going live with the Harvard Summer School Programme and we closed the month creating new relationships at Bett London at the ExCel following two consecutive successful years at Bett Asia in Malaysia and Singapore.

At the Bett Show (our first time exhibiting in London) we showcased how going paperless with our solution HEIapply can transform the entire application process for institutions. We shared how we are taking care to ensure a streamlined applicant journey – the ultimate applicant journey; starting with the registration form that captures initial interest until they reach enrolment.

We met with government ministers, administrators, potential partners, teachers, heads of admissions, education ministers, head masters, admissions officers, heads of recruitment and trade advisors coming from all over the UK and abroad to the Bett Show. Our team was motivated to brave the long hours of standing with thirst quenching discussions on HEIapply that turned into pilot runs of the solution at the end.

We are delighted that the thousands of friendly smiles and handshakes passed during the 4 day event have resulted in a much enlarged footprint of HEIapply coverage internationally.  We’re hoping only to retain and extend this list by the end of the year!

If your country doesn’t feature on our 2017 footprint map (but you know it should), please get in touch to find out how HEIapply can empower your organisation.

What other customers are saying...

"Our ideas were listened to and taken on board, the HEIapply team also offered their own spin on things to make it even better and I have been extremely happy with the system"